Flowers in the Attic

Discuss DVDs and Blu-rays released from Arrow and the films on them.
Forum rules
Post Reply
12 posts • Page 1 of 1
Message
Author

Flowers in the Attic 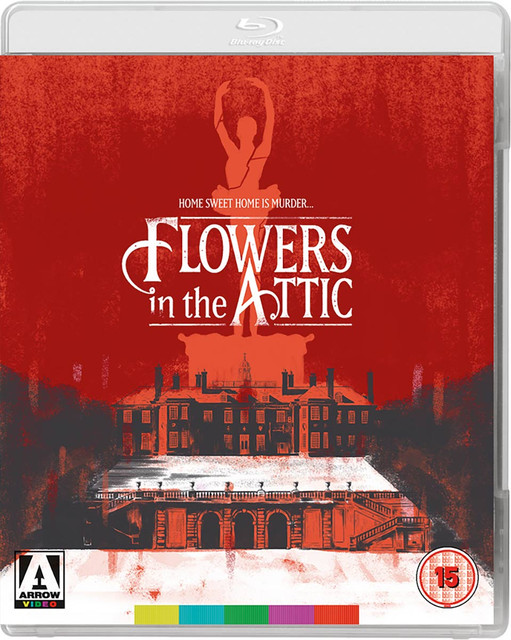 When her husband dies in a tragic accident, widow Corrine Dollanganger (Victoria Tennant, The Holcroft Covenant) takes her four children to the ancestral family home she fled before they were born. Locked away in the attic by their tyrannical grandmother (Academy Award® winner Louise Fletcher, One Flew Over the Cuckoo’s Nest), it falls to older and sister brother Chris (Jeb Stuart Adams, The Goonies) and Cathy (Kristy Swanson, Buffy the Vampire Slayer) to care for their younger siblings. But with their mother growing increasingly distant and erratic and a mysterious sickness taking hold, will any of the Dollanganger children survive to escape the clutches of the house’s cruel matriarch?

Originally published in 1979, VC Andrews’ novel Flowers in the Attic was a smash hit, spawning four sequels and going on to sell over 40 million copies worldwide. With undercurrents of incest and child abuse and a haunting score by Christopher Young (Hellraiser), Flowers in the Attic is a dark and chilling Gothic suspense thriller in the classic tradition.

Awful adaptation of a great book...but I'm in!
Top

Not a great (or even good) film by any means, but it's a sentimental guilty pleasure from my childhood. That score is still pretty haunting, and Kristy Swanson's "Eat the COOKIE!" is a line my mom and I constantly quote to this day (major spoilers in that linked video). I'm rather surprised this line hasn't gained the kind of so-bad-it's-hilarious cult fandom as "Garbage day!" from Silent Night, Deadly Night 2.
Top

Orlac wrote:Awful adaptation of a great book...but I'm in!

Always thought it was surprising that this book hasn't been remade in recent years. Seems ripe for a straight-ahead, well made film that would surely win its lead an Oscar.
Top

Third time's the charm, I guess

colinr0380 wrote:It has actually had a 2014 Lifetime TV remake with Heather Graham and Ellen Burstyn!

My two cents, but I have far less of an issue with remakes when the original film isn't canonical/beloved, especially when the source material is as rich as this.
Top

It has actually had a 2014 Lifetime TV remake with Heather Graham and Ellen Burstyn!
Top

I watched parts of the Lifetime version. The actress who plays Cathy seemed very good. Burstyn had her moments, taking a sort of middle ground between Louise Fletcher's arch detachment in the original and Piper Laurie's hysterics in Carrie. I found Heather Graham insufferable. Aside from that, it had all the stylistic blandness of a typical Lifetime movie. Is the book series really that good? I read the Wikipedia synopses a few years ago out of curiosity, and while I know those don't do justice to anything, the stories seemed like potboiler provocations, not unlike the current Fifty Shades series. Perhaps I've been missing out all these years.
Top

The first book, and for that matter Andrews' Heaven, is very effective. The sequels are rather lame though. I've never read any of the many, many, MANY posthumous novels attributed to Andrews.
Top

I watched this last night for the first time in years, and I have to say it held up surprisingly well for me. There's a small-scale quality that makes it feel like an 80s TV movie (writer/director Jeffrey Bloom spent most of his career in TV), though I can't quite put my finger on what makes it so. Perhaps because it compresses the expansive novel (which I still haven't read) into a shorter time frame, seemingly a few months. Maybe it's the movie-of-the-week-level performances of the four young actors. It might also be the film's restraint in showing what the novel so frankly details, especially in an era of explicit horror films. The movie just constantly seems reigned in, both technically and in content, as if for prime time TV broadcasting. But what works somehow elevates the film and saves it from falling into camp. Composer Christopher Young is the clear MVP, his haunting score providing tremendous atmosphere (in his interview on the Arrow disc, Young claims that Jeffrey Bloom, who left the project over changes with the ending, agreed to put his name back on the movie after hearing the score). Moments like the cutting of Kristy Swanson's hair that come dangerously close to reaching Mommie Dearest levels of camp are grounded by his music. The production design, particularly the key attic set, is also excellent and wonderful to look at.

Something that struck me last night is the coldness in the acting, which perhaps unintentionally contributes to its effectiveness. This is naturally characteristic of Louise Fletcher's grande dame performance as the fanatical and abusive grandmother. Likewise, Victoria Tennant gradually sheds her motherly kindness as she becomes more neglectful over the course of the film. But the children are another story. They are the heart of the film and should be our emotional figures of identification. Chalk it up to inexperience with such weighty material I suppose, but Swanson and Jeb Stuart Adams as the older kids are fascinatingly detached. While they go through the motions of playing surrogate parents to their younger siblings, the actors never exhibit real warmth for them or for each other. At times, they are literally posing for the camera (one shot has her sitting in the bathtub facing us while he is in crouched in a windowsill in profile). The younger child actors of course just spout their lines blankly in pancake makeup to look appropriately malnourished. It calls to mind the bizarre child performances in The Night of the Hunter.

As for the incest whose absence is mourned by all fans of the book, I actually like how it's merely hinted at throughout. I don't know how much of this was in the book, but there seem to be incestuous feelings running every which way. The opening of the film has a rather creepy scene between Swanson and her dad in which he reminds her how special she is to him (with Mother secretly watching). Later, the invalid grandfather holds Swanson in a chokehold, believing her to be Tennant, reminding her that she was always his favorite as well! When Tennant is forced to disrobe in front of her father for a scourging, a closeup shows his eyes widen (lustfully?). There's so much perversity lying just beneath the surface, and to be honest I don't think bringing it to the forefront would do the film many favors. It adds to the film's gothic air with buried secrets always threatening to break through.

Lastly, I watched Jeffrey Bloom's original ending, which is included in rough condition as a bonus on Arrow's disc. While it was a major point of contention during production and remains controversial among V.C. Andrews fans, I have to say I prefer the final, studio-mandated ending over Bloom's.
SpoilerShow
While the violent outcome of the final version is often accused of being over the top, the original manages to be more so and quite shrill. It has a ridiculous moment of Fletcher gliding toward us, knife in hand and screaming like a banshee, complete with a last-minute Deus-ex-Machina rescue by her heretofore faithful butler that just makes no sense at all. The fate of the mother in the released ending just feels more poetically just.
So, this remains an intriguing guilty pleasure for me. I'll never claim this to be a masterpiece, and I understand why so many people find it unsatisfying. But it has its good points, and even its failures are interesting to me and contribute to its unique flavor. Bloom's small-screen aesthetic makes this somehow weirder, and I can't help thinking that had this been released for TV instead of theatrical distribution, it would have been hailed as one of the best TV horrors of the decade.
Top

Man, this was a bad, bad film. It certainly has curio value, as there's several weird disconnects at work throughout. First off, it's trying so hard to look like a prestige project, but the content is absolute lip-smacking exploitation trash. The story is absurdly melodramatic, but the performances are as blank and indifferent as a high school English class read through (except when various participants abruptly flip the "hysteria" switch from time to time). And there's a nostalgic "incest is good" vibe running throughout that I guess you don't see everyday!
SpoilerShow
Everything goes bad when the hero of the story, the incestuous father, who fucked and married his niece and also fucks (or clearly wants to) his daughter / grand-niece, dies tragically. Thereafter, the villain of the piece is the only character in the film who thinks incest is a bad thing, and the heroes are the adolescent siblings who sleep and bathe together.
It teeters on the brink of gleeful camp at a couple of moments, but never really takes the plunge that could have made for a better time, if not a better film. For the morbidly curious only.
Top

The weird thing about the ending of the film is that it would have made it harder to film the sequels, but maybe they had had enough by then?
Top
Post Reply
12 posts • Page 1 of 1

Return to “Arrow DVDs and Blu-rays”