Nasir007 wrote: ↑
Wed Nov 20, 2019 4:38 pm
This is a good move. Of course, there will be a sequel but they should wait till after the awards season is over to announce it because it would be somewhat adverse to their chances.

There is currently a patina of auteur sheen about the movie - a prestigious prize winner at Venice and almost a risky independent film made within the studio system.

The notion that this is just another cash grab franchise film will destroy the sentiment that the film needs to be supported with awards etc.

How stupid do you think the average Oscar voter is, Nasir? No one is operating under the illusion that this DC Comics film that just made a billion dollars is anything but a "cash grab franchise film," as you put it, let alone those within the industry - everyone knows the score here
Top

What is a sequel of an origin story of Batman's villain if not Batman itself?
Top


I love [Joker]. I think it’s brilliant and not only Todd’s best film but it’s exciting because it’s on a frontier. And that’s usually where very good things happen. Todd and Scott’s screenplay has that relevance that occurs when work is authentic and not derivative. We find Arthur disturbing and poignant simultaneously. He’s both child victim and adult perpetrator. Both are true, as is the case with most schizophrenics. That both are true is uncomfortable. We find ourselves in a fugue state. It’s counterpoint. It’s why Arthur and the film’s impact sustains so strongly in memory. To build on all of this, and for Joaquin, Todd, and Scott, to impact upon on this powerfully is a difficult accomplishment. Congratulations, Todd!

Who is that a picture of?
Top

I think the image is supposed to be a gif of one of the pic's more contentious scenes (the one where Mortensen offers Ali a chicken wing), but it isn't animating for some reason.
Top

It is from Green Book and it's the scene where Viggo's character tells Marhershala Ali's character how to eat fried chicken. It's about as blunt as a response DarkImbecile could give as a counterpoint to mfunk's post. I confess I thought it was both a pretty accurate/hilarious response given the current political climate and the fact that Spike Lee was present at the awards and won for BlacKkKlansmen shortly before the Best Picture Oscar was announced.

Independent of how one might feel about Joker I think it's disingenuous at this point to assume that it did not provide a public discussion at some level and more importantly that it made a ton of money in contrast to critics responses to it. The latter point is quite interesting to me because the exact same type of hostile response sank Justice League which should have been a slam dunk regardless of it's quality.

What will be most interesting to me is how Academy Members feel about it. Jessica Chastain for instance called Phoenix's performance one of the best performances she's ever seen. Contrast that with an anonymous voter who said that films with such subject matter were dangerous and that the Academy should ignore it entirely. How this plays out in February really seems up in the air to me at this time.
Top

waitingforgodard wrote: ↑
Mon Sep 02, 2019 6:23 am
I don’t understand why this movie exists because the nature of the Joker means no story is fulfilling without the batman. As a character, the joker is a pretty boring sociopathic anarchist. It's only when you run him up against batman, another boring character, do things start to get interesting.

This is my visceral reaction to this film too, though as superhero films aren't my bag to begin with, maybe I should stay out of this! Still, I have never begrudged fans of these works the high-production-value, exhilarating, edge-of-your-seat entertainment that they promise – each to their own, basically – but I can't help but find the grandiose origin stories and self-serious narratives of these "dark" superhero films super-corny.

Also, Todd Phillips might be just about my least-favourite director ever (I think Road Trip and The Hangover might both be in the bottom 10 films I've ever watched), so all signs are pointing to this film officially being my Room 101.

Well, so much for that! I finally gave into the hype and went and saw it yesterday, and I'm glad I did. It's not a great film by any means – both the dialogue and musical cues are thuddingly obvious throughout, and I could have done without the junior Batman plot device – but Phoenix is really good, and there's something undeniably exhilarating about his protagonist's embrace of the dark side (in some ways, it even feels like a violent dream). In a funny way, I kind of get where the hand-wringing op eds were coming from: this really is a film that gets right into the head of, say, a high school mass shooter, and presents the world pretty much as someone like that may see it. But I see that as a genuine artistic achievement, not a reason to condemn the film.
Top

Never Cursed wrote: ↑
Fri Nov 22, 2019 3:02 am
I think the image is supposed to be a gif of one of the pic's more contentious scenes (the one where Mortensen offers Ali a chicken wing), but it isn't animating for some reason.

That’s odd... I can see the animation running on my phone and desktop in both the original post and barryconvex’s quote of it. Are others only seeing a photo?
Top

When you posted it, it was indeed animating correctly. Now, it’s frozen on a part of the first frame (part of Mortensen).
Top

Are you viewing it on desktop or mobile?
Top

I checked both, same problem on each one
Top

It works fine for me on Google Chrome
Top

Fine for me as well using Mozilla on desktop.
Top

I'm also on Chrome on both phone and desktop and it's a still image.
Top

For what it's worth, I'm on Chrome on desktop and Safari on mobile, both of which show it as a still image
Top

Wasn't The Dark Knight essentially Heat with superhero characters in it?
Top

Only at a very superficial tweet like level. If you have seen both movies and that is your takeaway, that is a disservice to both films.
Top

Phillips will earn around 100 million dollars from this, a result of declining an upfront salary for a large backend (something he's done before with his Hangover movies). I'm sure Phoenix is now similarly wealthy for his work here.
Top

This steelbook cover should've been the movie poster: 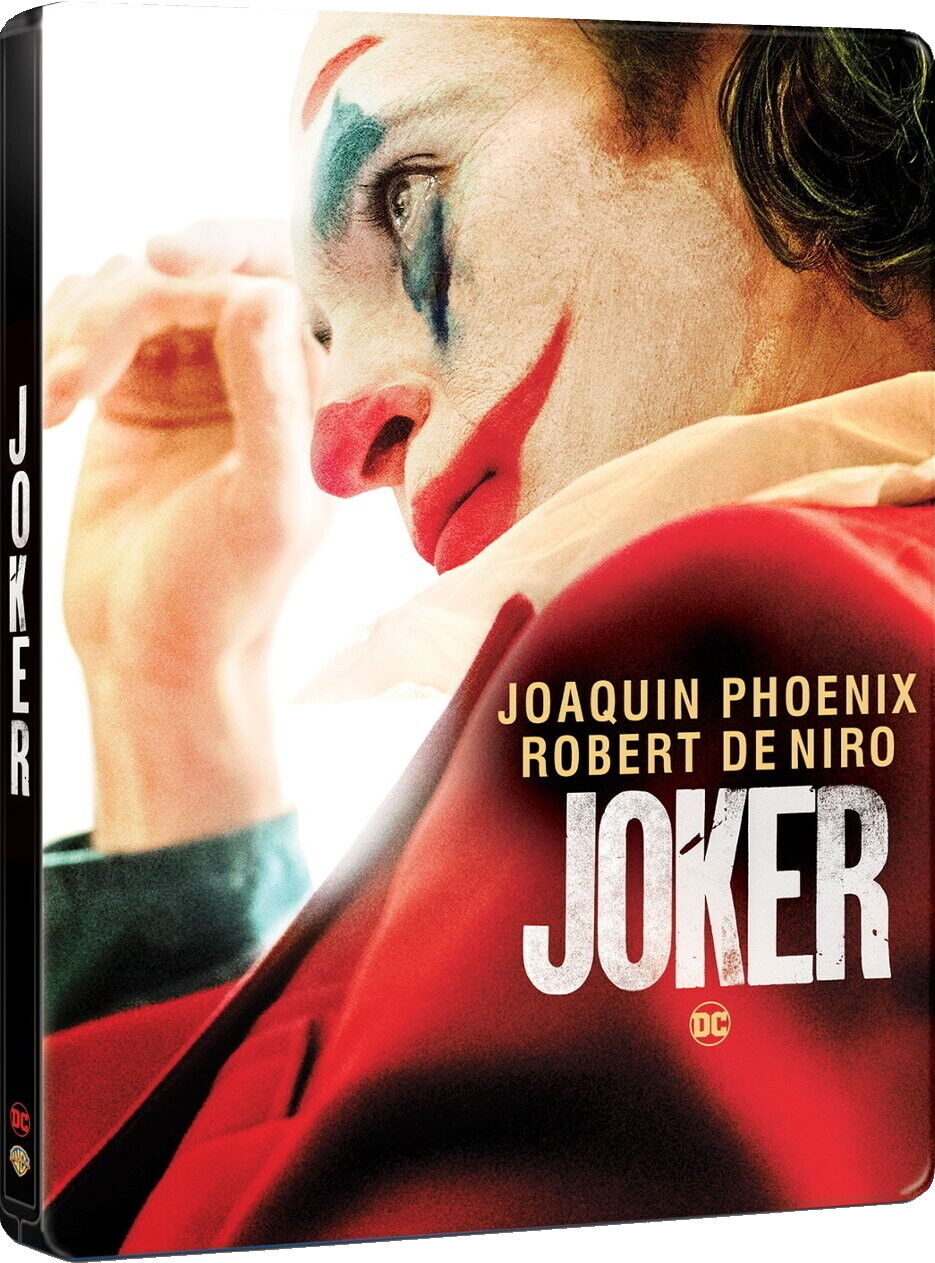 therewillbeblus wrote:
SpoilerShow
The incels can't even latch onto the ego-inducing notion of becoming self-important through fear, because Phillips and Phoenix refuse any charitable outlet to idolize their Joker.

SpoilerShow
Except, of course, how he becomes the face of a movement protesting against the rich and powerful oppressors.
Seems like you’re overlooking that major component of the film.

Now having seen the movie and merely playing devil's advocate to TTWBB's point which doesn't align with my own the protesters are divorced from Fleck as a result of never meeting him and only seeing a portrait of him. The character's he saves are closer to him and thus give the real response. This highlights the difference between reality and using someone as a symbol. It's a bit like the Goetz murders from around the same time as the movie is set. Though of course Andy Kaufman being another contemporary resource Phillips seems to be mining from is probably what undermines that reading.
Last edited by knives on Sun Feb 23, 2020 1:50 pm, edited 1 time in total.
Top

Having now seen it, it felt like a humpteen "psycho outcast got pushed over the edge by our individualistic society", but with a Gotham City skin. While Phoenix was the main but only interesting thing in the movie for me, everything else felt rehashed and had pretty much nothing substantial to offer to me, to the point I almost turned the movie off after 30 minutes, seeing how it was already hammering ham-fistedly its socio-economical message.

The movie only further unraveled from there, because it's difficult, on top of these issues already, to imagine such a character fitting into the Batman canon. In the end, we're ended over not an evil mastermind, but a simply very unlucky guy who became progessively the victim of our current society. Not only I find it hard to swallow to make Joker a victim and not having him own a bit more his actions, it's also very difficult to imagine how such a character to turn to become the title-character as we know it.

I wasn't surprised to then see that while Phoenix said this is indeed THE Joker, Philipps has been much more vague in this regard. I suppose it's again up to the audience to choose, since the movie lazily chose not to bother making up its mind. But hey, who knows : maybe The Batman won't be about THE Batman, but someone who might be or not THE Batman, maybe his father, or a mentor, who knows, right ?

With all this and the movie toying superfluously with what felt like an easy way out "is it real or only in his head ?" writing-scheme, and not being helped by a style that doesn't have a lot to be remembered, this felt very mediocre. Maybe I would have found this more novel without having seen Taxi Driver and The King of Comedy, though, but in the end, while it IS technically competent and while Phoenix is, again, very good in it, it never clicked for me. I also tend to think it wouldn't have had the popularity and reception it got without its Gotham City skin.

knives I’m not sure I really understand your point fully but I did concede that people can and do use anyone as a symbol. My argument shifted to the filmmakers, from my view, making a self-conscious effort to confront such behavior and readings of symbols, and express this in a way that’s abrasive but also, as I’ve come to feel, validating. There is empathy in this movie but ultimately it raises a question of responsibility across many facets that is rhetorical. I think the hope is that through empathy and stark depictions of unglamorous Joker behavior coupled with actual unlikeable traits (vs Ledger’s romanticized nihilism) the audience is allowed to feel for him and also be sober to the illusion of vengeance as righteous or cool, as well as the humanity behind the feelings of anger rather than condoning and moving passed this to emotionally driven projective action. But yeah, intention doesn’t mean it comes across that way to everyone or that he still won’t be that symbol, and I’m sure many people did see this and only felt closer to the Joker using that empathy as more credence rather than deconstructing the myth of the confident nihilistic Nolan Joker to unpack their deep rooted core beliefs and engage in a therapeutic process.
Top
Post Reply
302 posts