As Ebert liked to say, no good movie can be too long, and no bad movie too short
Top

? - I mean I get what you're aiming at but why are we griping about the length of films here before we've seen them? This place is better than that.

I mentioned upthread that I've read some of the script. That's sort of the foundation of my comment as the script did not seem it could be a 2 hr 20 min movie even as it was and there was stuff in the beginning I was kind of hoping would be cut or shortened because of the poor quality of the dialogue.

That said, fair enough, maybe the film works and earns the run-time.
Top

And yet I can't help but think that I would have liked movies like Luca's Suspiria or Villeneuve's Blade Runner 2049 a lot better if it they were 2 hr movies instead of a 2 1/2 hour ones with too much fat left on the plot.

That's another thing that's probably informing my reaction to Midsommar's run-time, and maybe that's unfair of me. Given that I thought Hereditary would have benefited from some judicious trimming, I'm not going to hold my breath that I will love everything Midsommar throws at me--but maybe it will at least feel cogent and of one piece.
Top

You see, I always thought that "this film could stand to lose ten to fifteen minutes" was just the default comment of people who actually have no idea why they liked or didn't like a movie and have nothing to say, but think it sounds intelligent. By saying the same thing about a movie you haven't even seen, you're kind of proving my point.
Top

I must confess confusion at some comments at the runtime. Surely it's disingenuous to assume anything before we see it?
Top

The Shining is 144 minutes long in the US version and I prefer it to the shorter European cut. Midsommar might similarly justify its length. I didn't like Hereditary but Aster is a talented filmmaker and I keep my fingers crossed that this film hits all the right notes (despite the iffy dialogue in the trailer).
Top

domino harvey wrote:As Ebert liked to say, no good movie can be too long, and no bad movie too short

But then there’s Samuel Johnson’s famous comment that Paradise Lost is a seminal work, but no one ever wished it longer than it is.
Top

zedz wrote: ↑
Wed Jun 05, 2019 3:45 pm
You see, I always thought that "this film could stand to lose ten to fifteen minutes" was just the default comment of people who actually have no idea why they liked or didn't like a movie and have nothing to say, but think it sounds intelligent. By saying the same thing about a movie you haven't even seen, you're kind of proving my point.

I already acknowledged that maybe Midsommar works better than its script does and justifies its length. Why continue to beat the dead horse?
Top

Persona wrote: ↑
Wed Jun 05, 2019 4:51 pm
I already acknowledged that maybe Midsommar works better than its script does and justifies its length.

I'm sure the filmmakers appreciate your magnanimity!
Top

This thread could stand to lose 10-15 posts
Top

Maybe we shouldn't start threads at all until the movie is available to watch!

Or, at least, no opinions allowed. I get why people took issue with my initial comment--which was brief, tongue-in-cheek, and wasn't trying to make an actual value judgment about the movie itself--but if you have familiarity with a film's story and screenplay, having a reaction to its run-time isn't much different than having a reaction to casting news or a trailer, for instance, so to me the disingenuous thing is acting like there is some huge difference between those reactions.

If we're going to say that we shouldn't be posting any sort of degree of opinion about a movie, just news items, until we've seen the movie--okay, that's fair. For the time being...

I remain hopeful for Midsommar even though I don't really like the newest trailer. There were some promising bits in the screenplay, the teaser had a great mood and rhythm to it that I hope the full film captures, and I like the cast. I also think Aster is a very promising director in terms of his precision of aesthetic vision and some of the ways he plays with tropes, so while Hereditary didn't completely sell me because of what I found to be some thematic floundering as the film leaned too hard into its genre in its third act, I am hopeful that Aster will perhaps hit his narrative stride, to to speak, with this one.
Top 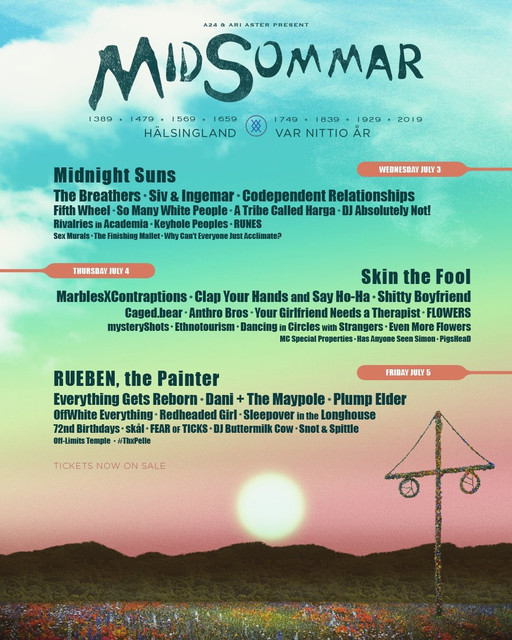 Jordan Peele says this "usurps Wicker Man as the most iconic pagan movie to be referenced.

Pity they didn't ask Peele to clarify if he meant the Hardy film or the Cage remake.

First reviews popping up on my Twitter are positive but not enthusiastic, good but not as good as Hereditary.
Top

Lost Highway wrote: ↑
Wed Jun 19, 2019 3:19 am
First reviews popping up on my Twitter are positive but not enthusiastic, good but not as good as Hereditary.

I've seen some pretty positive reactions but overall I would say the response is a little muted when it comes to the script or any of the characters besides Pugh's.

Sounds like Aster's execution once again sort of elevates the material and that this one works a bit more intentionally as a dark comedy than Hereditary did.
Top

Slant Magazine likes Midsommar a good deal better than Hereditary: 3.5 out of 4 stars to the latter's 2.5
Top

That’s good, though I frequently find myself out of step with Slant’s take on horror films. Reviews have been very good on the whole. Really looking forward to Midsommar but disappointed that it isn’t getting a release in Germany till September. Smaller films can take ages to get here.
Top

I actually didn't read the review, or any others. I'm going to wait until after I've seen the film for myself. Two months is actually not too bad but I sympathise with your frustration, and on top of that, you're probably getting a dubbed version even in Berlin, no?
Top

Finch wrote: ↑
Thu Jun 27, 2019 4:48 pm
I actually didn't read the review, or any others. I'm going to wait until after I've seen the film for myself. Two months is actually not too bad but I sympathise with your frustration, and on top of that, you're probably getting a dubbed version even in Berlin, no?

All major German cities have cinemas which show films in their original language. But yes, two months is better than some smaller films, which can take up to a year to come out here.
Top

Richard Brody was not amused

If this is how he’s framing his criticism, I suspect I’m going to really like this movie: 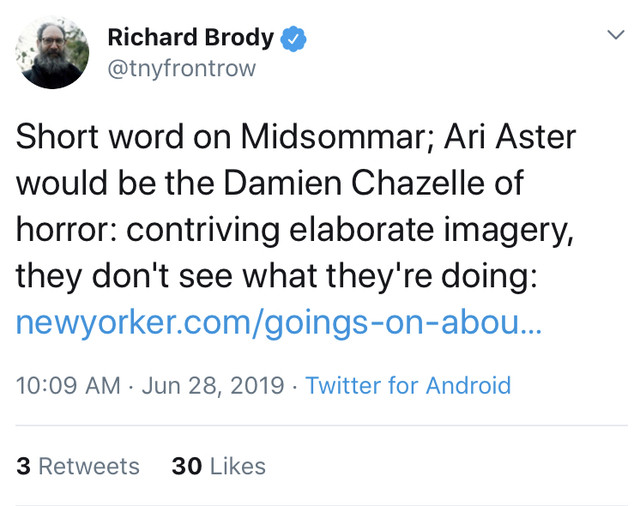 This was pretty bad. Predictable but worse of all, completely dull.
Top

I could see this emerging with a low cinemascore- rather than a straight horror, it worked better as a metaphor for the feeling of being trapped in a failing relationship and specifically the loneliness that stems from isolating effects of individualistic barriers common in Western cultures. But wow, this worked for me. It was “messier” and less consistent or even than Hereditary but this perfectly and cohesively embodied the scattered, confused, and uncomfortable moods of the experience of our protagonist. While there weren’t many “scary” moments and certainly many that basked in deliberately paced plateaus of non-action, I had a knot sitting quietly in my stomach throughout, not loosening and tightening as is common on the rollercoaster ride of many a horror film, but remaining the same regardless of how funny (and this was very funny at times, a wise choice by Aster to fully embrace the weirdness and allow us to be surrogate fish-out-of-water) or serious the scene became, often giving space for both to occur as the creepy vibes elicited both responses equally. The highlight of the entire film comes close to the end when
SpoilerShow
the Swedish girls all scream with our heroine as she cries out over and over
which, while perhaps predictable, achieved a kind of catharsis few films have given me lately. This film can be accused of being obvious, messy, slow, and wearing its themes on its sleeve, and those accusations aren’t wrong, but I liked and appreciated it in spite of, and partly because of, all of that and more. Midsommar might not be that scary, but it’s not afraid, and I admired the risks Aster took, the confidence with which he took them, and how often he succeeded in towing a dangerous line that could have failed miserably if it weren't for the poetic unity via disruptions in emotional equilibrium setting a tone that vibrated throughout this fever dream.
Top

I can report that several groups of post-millennials attending the late screening I saw (I was probably the oldest audience member by nearly 20 years) seemed rapt, amused, and impressed. I was too.
Top

I confess I don't entirely get what Brody is talking about in his snippet there. I saw a film about a toxic relationship that had a cult of pagans as a backdrop. It's certainly not an easy to watch film at some points but the more grotesque images are so infrequent I really feel it's fair to condemn Aster here when far more vile things frequent the screen. The sequences with a very upset Florence Pugh (Who is wonderful in this film.) were very difficult for me to watch too.

I am however uncertain of one specific thing, which is most certainly intentional:

SpoilerShow
Christian, the boyfriend is the last sacrifice, but Aster deliberately cuts out Dani's response when asked which individual she wishes to see sacrificed. The question I have is how much of Dani's apparent satisfaction is because of her compromised mental state and how much of it is because of her desire to be accepted? I'm leaning heavily on the former here but I think there's some wiggle room there.
On the subject of the film itself:

SpoilerShow
Really, ultimately I saw the film as a castigation against toxic men in relationships, particularly those who treat women poorly. Feminist is exactly the word I'd use to describe the film but the Pagan Sex Cult in this film isn't the only evil at play here.
Aster has stated in a couple interviews that there's a great deal more footage (His rough cut was three hours and forty five minutes.) and that about twenty minutes of this was incredibly painful for him to cut out. I'd certainly be interested in seeing a new version but I'm unsure if adding something at this point would add or subtract. Regardless this is one of my favorite films of this year so far.
Top
Post Reply
198 posts