The remaining Eleanor & Jane musicals will likely be in Vols. 4-5.
Top

zedz wrote:With the four Powell films herein, maybe this set has superceded it? After this, a Powell-dedicated set is likely to look rather depleted.

I think that's fairly certain. It also (along with last month's A Date With Judy) pretty well scotches any Jane Powell set as well.

They could actually still do a Jane Powell set with:

shearerchic wrote:They could actually still do a Jane Powell set with:

Well that would be fine if they did, but it seems like the odds have gone well down. Should such a thing come to pass, I'd like to think Small Town Girl would be in it, even though she's shown up by Bobby Van and Ann Miller.
Top

KISMET looks beautiful on DVD. The color range is stunning, and the audio is top notch. The excised bit of Rahadlakum is a treat, also. This disc alone justifies the entire set, for me.
Top

Got my set in the mail today and the box is silvery and sparkly. AND the movies are housed in slim packs! Just beautiful! Can't wait to start watching those Eleanor Powell movies now!
Top

Nice bit of trivia but I couldn't confirm it until I got the parcel today.

Xavier Cugat's terrific Jungle Rhumba number in Neptune's Daughter is the same music as the piece Siodmak highlights in Criss Cross when Burt runs into Yvonne de Carlo again at their old haunt - this time played by Essy Morales and his manic band. Your guess is as good as mine as to who featured it first, given imdb lists Criss Cross' prem date as 2004!!! Both movies were of course released in 1949.

EDIT: the music flipped me out - this part of the TCM Esther Williams Box (which landed in the same post.)

I caught It's Always Fair Weather recently on TCM and I came away pretty impressed. While Comden and Green originally construed the film as a kind of sequel to their On the Town, one of the weaknesses of Fair Weather is our (the audience's) relative lack of familiarity with these characters and their situations. There is no built-in sympathy and thus, when the characters do meet again in 1955, our allegiances shift with every critical faux-pas, and as a consequence, we're ultimately left with no allegiances to speak of through the first half of the picture. Even Kelly's star power isn't enough to diminish the impression that he's just a loutish gambler (which isn't a far-off estimation, even at film's end). As narrative construction goes, this appears to be a critical mistake - there is no audience identification through the entire first forty-five minutes of the film! As a result, it's not difficult to see why audiences largely rejected the film in 1955; it's not because the film is melancholy (though it is), but because the characters are completely unsympathetic (they don't even like each other!) through the entire first half of the movie.

In a different film, the restaurant scene ("Why Are We Here") would be the culmination of the film's tragic narrative arc, but here it serves as the impetus for a complete one hundred eighty turn around in tone. In other words, this is where the Hollywood magic begins to kick in and reality (thankfully) flies out the window. I would argue that this shift occurs even before Charisse's wonderful "Baby, You Knock Me out" number. We become completely aware of this tonal shift when Dolores Gray begins her diva fit in the television studio and the television execs essentially plot the course of the rest of the picture. But there is something clever to this device since it definitely approximates the Hollywood schematic to a "T".

This shift in tone couldn't come at a better time, and it results in some of the most wonderful musical/dance numbers of the film - "Baby, You Knock Me Out," "Saturation-Wise," and "I Like Myself" coming all in succession. The first of these features some absolutely sublime dancing from the incomparable Charisse - and unfortunately, it's all too brief. Dailey's "Saturation-Wise" is great - in part because of Dailey's wonderfully acerbic drunk and absolutely manic energy - but also in how it masterfully plays with the music of the song as previously sung by the company executives (and that song itself transitions wonderfully into "March, March"). Finally, Kelly's "I Like Myself" has to be the least fun of the three songs, but the most amazing as a work of dance art. What's most impressive about the whole sequence is that he and Donen never fudge the shots - we see Kelly move effortlessly from skating into tapping, all in one shot. The whole sequence, which compares favorably with Kelly's more famous title number from Singin' In the Rain, absolutely elevates Fair Weather into the pantheon of great Kelly musicals.

Dave Kehr has noted that Donen's direction in this is "formally perfect,"and there is some truth to this. Like Minelli, Donen had an almost instinctive gift for filming music and dance numbers, and Fair Weather is no exception in his oeuvre. He (and I suppose also, Kelly) fills each and every CinemaScope frame and allows characters to use and occupy the spaces that are open. The result is a triumph of economy; a minimal amount of cuts allow the dancing to breathe and Kelly's choreography consequently takes on a narrative form of its own. Particularly succesful are the tableau-like street shots (characters pivot to face the camera [and the street]) which heighten the energy of the film's early scenes and open up the frame horizontally, allowing the dancers to move laterally. In other words, it allows them to use the entirety of the frame, and Kelly and Donen make sure that they do. This is to say nothing of the editing, which is, in all of the dance sequences, simply sublime - the action crisp and intelligible throughout.

Special mention to Dolores Gray and the fabulous "Thanks a Lot, but No Thanks." What a crazy and totally bizarre dance number!
Top

devlinnn wrote:I don't think it was the second gin talkin', but I doubt I'd be the only 'straight' gent here to find Stanley Donen pretty damn sexy and cool chattin' to Mr. Osborne on the Royal Wedding disc. Effortlessly charming, honest and direct, I'd give a million dollars to look this good in my 40s, let alone my 80s.

I'm almost sorry to revive this thread, but rather belatedly I watched that disc last night and had exactly the same thoughts. The short excerpt from Donen's Academy Award appearance was priceless, too.

I thoroughly enjoyed "Royal Wedding", too. Certainly one of Astaire's very best post-WWII films (with the sole exception of "The Band Wagon", but "Wedding" comes close). Donen's direction was so light-weight and visually inventive compared to the rather 'solid' (some might call it 'dull') direction by Walters in films like "Barkeleys of Broadway", "Easter Parade" and indeed "Belle of New York". The wit already shows in the initial 'royal' dance sequence, and I really loved the slow but convincing build-up of Fred's affair with the dancer played by Winston Churchill's daughter. To think that this role was actually intended for Moira Shearer... man... I really would have liked to see HER alongside Fred, but it seems that Fred was somehow afraid that their dancing styles would clash. That's possible, of course, but if I think of Shearer's later, totally non-classical dance scene in "Peeping Tom", I can't help but thinking that the experiment would have been a successful one, and I can't imagine to what heights "Royal Wedding" would have risen with Shearer playing that part. Ah well, it's great anyway...

One thing that irritated me, however, was the sequence with Powell and Lawford taking a stroll through the village, where the image suddenly becomes very dark. If this was meant to be a day-for-night shot, it certainly doesn't work at all, considering the very heavy shadows caused by the midday sunlight (almost as bad as Orlok walking day-for-night through the town in the new "Nosferatu" resto). I don't think it's a flaw of the colour scheme of the transfer, as the rest of the film looks pretty marvellous. But does anyone know more?
Top

Anyone else experiencing technical problems with discs from Volume 2? Royal Wedding and The Pirate have stopped working for me. Depending on player/drive I can start them, but they will not play the whole movie and some special features have disc read problems too. There is no visible damage or dirt

Just yet another magically degrading WB DVD. Many, many WB titles have this issue, and it’s random based on the pressing plant, so no guarantee a title will or won’t without testing first
Top

I believe I had a similar problem with my library's copy of Presenting Lily Mars. Clean disc, but my player couldn't read it.
Top

Sorry, but you meant "without re-watching them", right? Or one can buy a replacement DVD and by somehow "checking" it, know in advance the discs will or will not be eventually degraded (or already are)? Thanks for clarifying!
Top

Yes, but I had this screenshot saved which may make things easier via checking the code on the inner ring on the underside of the disc 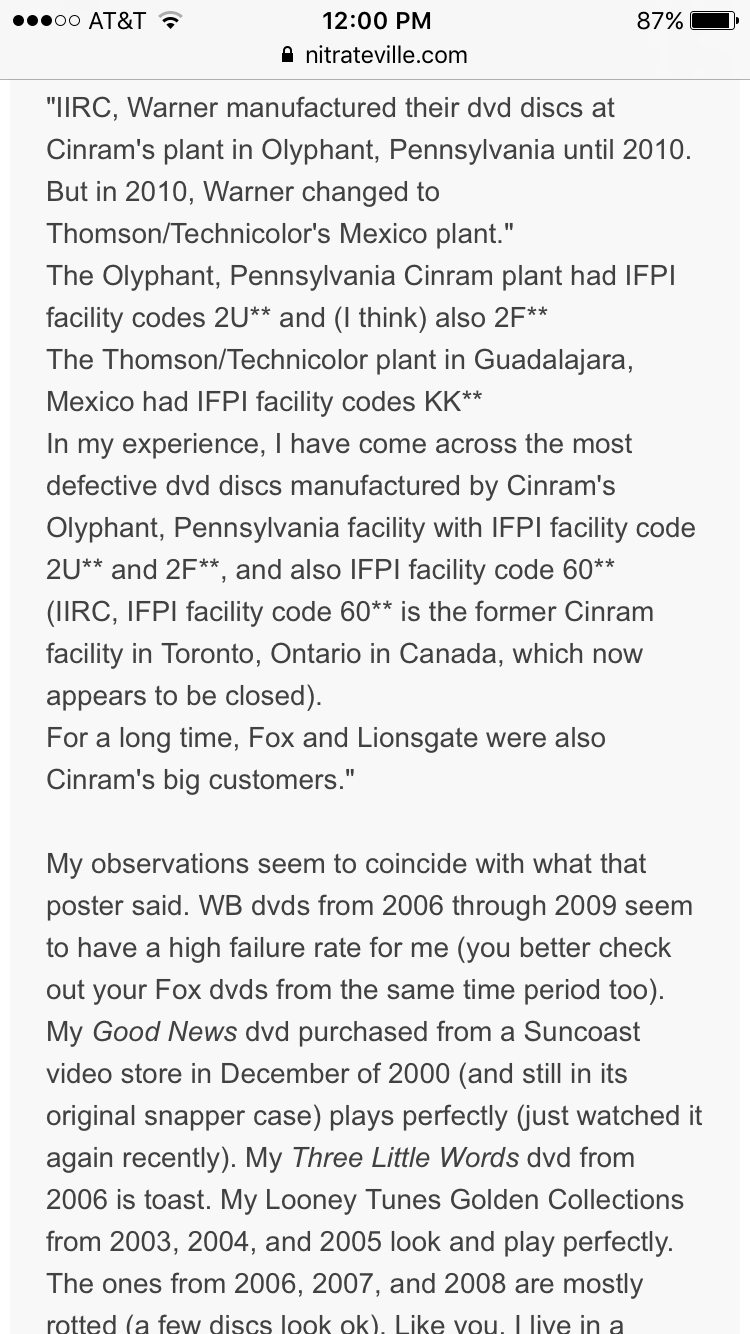 Great, thank you for this information!
Top

We're currently having similar issues on BD in France for 2008-2009 pressings. then-QOL's factory said they used an improper batch of resin that ended up generating discs that were rotting after a few years only. Unfortunately, the issue seems way more widespread than what they said : they talked about 2008-2009, but their unreliability goes up to 2012 pressings. Some MPO-pressed discs in 2009, 2010 and 2011 also seem abnormally concerned when comparing other manufactured discs.
And it now seems that some Asian discs are having similar issues.
Top

Thanks for the depressing information.

Yes, these are IFPI 60** discs from the Canadian plant. However, other discs in the same box are as well and are still working. So, I guess backing up everything from the affected plants is the only way forward? What's a good free tool to do so these days that is "codefree", ImgBurn? Luckily I live in PAL-land, so most of my discs are not from these plants. A quick estimate in DVD Profiler suggests I still have ~150 US Warner discs from that timeframe though

Is there some kind of replacement program?

For reference, this is the quotes topic above: Link
Top
Post Reply
67 posts

Return to “DVD and Blu-ray News and Discussions”